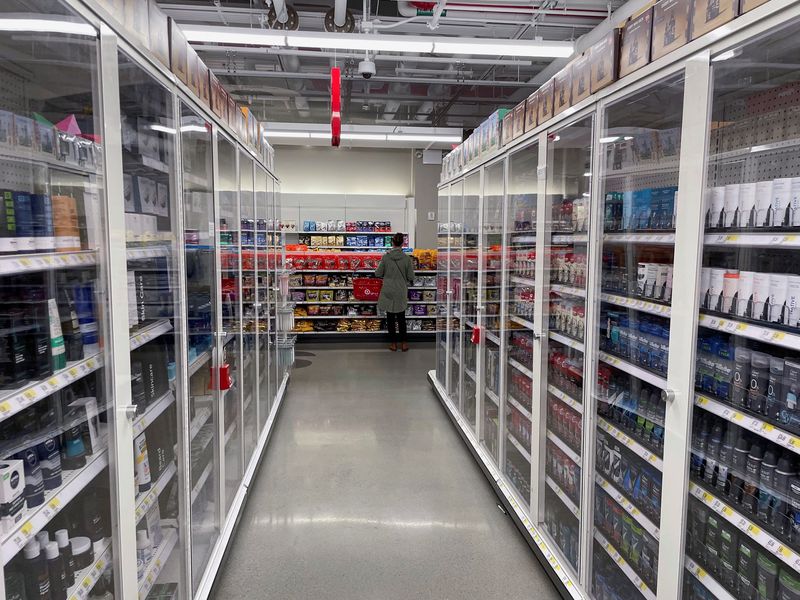 NEW YORK (Reuters) -Retailers ranging from Walmart (NYSE:WMT) to Barnes & Noble (NYSE:BKS_old) are installing cameras or locking away items to deter shoplifters and thieves as they brace for a post-pandemic rush of holiday shoppers this year.

Some, including Walmart, J.C. Penney, Apple Inc (NASDAQ:AAPL). and Walgreens, put in place new surveillance systems or more security guards. Others, like Target (NYSE:TGT) and Barnes & Noble, sealed merchandise behind plexiglass or tethered it with steel cables to store shelves.

The retail industry has decried theft this holiday season as it struggles with excess inventories and a pullback in consumer spending at a time of high inflation.

“Sales are suppressed. Profits are being punished at the time of the highest inflation in 42 years. And now with the cost of preventing crime going up, that’s going to be passed along in higher prices,” said Burt Flickinger, managing director at retail consulting firm Strategic Resource Group.

The effect on holiday sales and profits “will be horrific,” he added. “Nowadays you can see shampoos are locked up, along with acetaminophen and Tylenol and multipacks of toothpaste locked up…. people planning to shop in stores will not want to go in to these locked and over-secured stores. So overall retailers lose both the planned purchase and the impulse purchases.”

Crime has been in the spotlight since a spate of brazen, violent store thefts – including a “smash and grab” incident during the holiday season last year where 80 people rushed into a Nordstrom (NYSE:JWN) near San Francisco and ran out with armfuls of merchandise, injuring five employees. One survey by the National Retail Federation (NRF) cited a 26.5% jump last year in “organized retail crime” carried out by groups of people.

But it is unclear whether overall U.S. retail crime is on the rise, with little data available on the problem. Total losses from shoplifting, theft, fraud and errors for U.S. retailers in 2021 remained steady at an average rate of 1.4% of total sales, as it had been over the previous five years.

Part of the problem is that prosecuting petty crime is a hassle, and some states raised their thresholds for the value of merchandise stolen to around $1,000 to trigger a felony charge.

That puts the onus on preventing crime in the first place, especially during the Thanksgiving weekend that is expected to see a record shopper turnout. The busy holiday season represents nearly 20% of total U.S. retail sales for the year.

A sign of the times can be seen in the small communities of Paducah, Kentucky, and Opelika, Alabama, where Walmart, J.C. Penney, Walgreens and other major retailers have brought in large, mobile surveillance units that record all activity in their parking lots.

Walmart, for example, said it has nine surveillance units outside three massive Supercenter stores in both cities. One of the retailer’s stores in Virginia on Tuesday was the scene of the latest mass shooting in the United States, when a manager opened fire and killed six people before turning the gun on himself.

In Paducah and Opelika, the units provided by LiveView Technologies as part of a pilot offer 24-hour video footage to retailers so they can alert authorities of any suspicious activity, said Brian Laird, Paducah’s chief of police. They also have flashing strobe lights and loud speakers to warn potential thieves that their actions are being observed.

Others retailers have focused their anti-theft efforts inside their stores. A Target in White Plains, New York, for example, placed all Ulta Beauty (NASDAQ:ULTA) cosmetics behind locked plexiglass.

At a Barnes & Noble in the Galleria Mall in White Plains, American Girl ‘Wellie Wisher’ dolls are shackled to the shelves with electronic ties. At another Barnes & Noble store in Manhattan, customers have to carry empty Lego set boxes to cashiers and receive the pieces after their purchase.

Major consumer products companies such as Procter & Gamble (NYSE:PG) are annoyed – and so are shoppers.

P&G last week said it is investing in in-store displays to avoid having its razor blades stuck in glass casing, while shoppers complain the locked displays and cables slow them down and force them to find staff who can set the merchandise free.

“Target has a new feature!” TikTok user @manifest_makeup wrote in the caption of a video shared in September with her 20,000 followers. “Everything is now behind glass just like Walmart!”

Rex Freiberger, a 40-year-old Los Angeles resident, says he has noticed “more and more items” placed behind plexiglass at the Walmart where he shops for holiday gifts.

“My biggest pet peeve about having so many items behind locked doors is when stores don’t have enough workers on the floor to help unlock those doors,” he said.

Retailers rarely openly acknowledge the threat of theft or crime because they generally don’t want to spook shoppers.

“Along with other retailers, we’ve seen a significant increase in theft and organized retail crime across our business,” Target CEO Brian Cornell told investors on a November 16 conference call.

“As a result, we’re making significant investments in training and technology that can deter theft and keep our guests and store team members safe.”

Apple started posting a plainclothes security guard at its stores more often in recent weeks after thieves at a few locations stole iPhones straight out of employees’ hands, a person familiar with the matter said.

At one U.S. store, an undercover guard roams the floor during the five busiest days of the week, up from two to three days a week a few months ago, the source said.