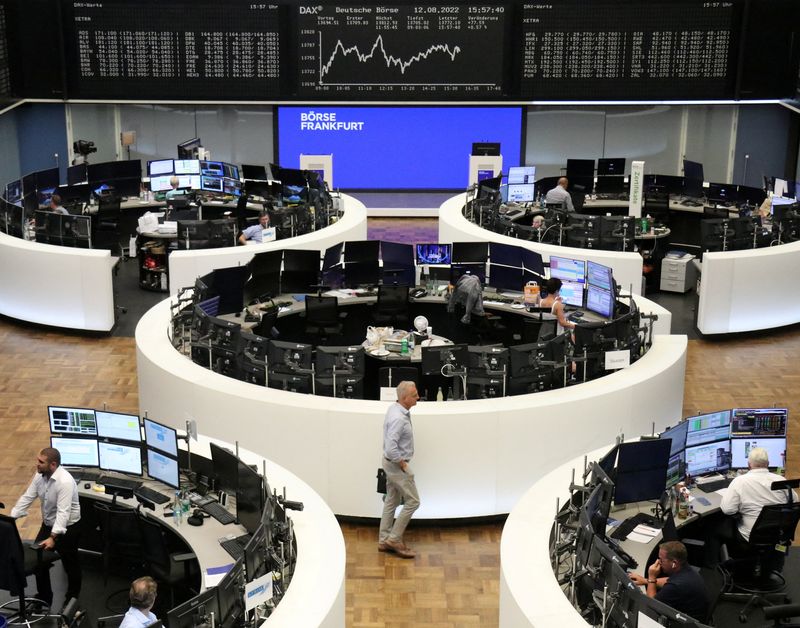 European shares slid on Wednesday and bond yields rallied after a sharp rise in UK inflation brought the spotlight back to more monetary tightening amid data which showed euro zone economic growth was slightly less robust in the second quarter.

The pan-European STOXX 600 shed 0.9%, clocking its biggest one-day percentage fall in more than a month. The index also snapped a five-day winning streak.

“The market is seeing the UK experience as a harbinger of what is to come in the EU,” said Stuart Cole, chief macro economist at Equiti Capital.

Euro zone government bond yields jumped after the inflation reading, while investors also turned their focus to data which showed economic growth in the bloc was less-than-expected in the second quarter but still strong, and employment rose again.[GVD/EUR]

European bourses have bounced off June lows, but have been struggling to make headway in August on growing concerns of a recession, high inflation and low water levels in the Rhine river.

The river is Germany’s main commercial artery, which is now experiencing a block, with 20 ships stuck in traffic after a vessel’s engine failure closed part of the waterway.

He noted that even if it is a smaller problem for Germany compared to the gas crisis or a recent shortage of semiconductors, if it persists until December it could weigh on economic growth and add to inflation.

Sanofi (EPA:SASY) fell 5.7% after the French healthcare company stopped further work on amcenestrant, a treatment once seen to have strong commercial potential in breast cancer, after a second trial failure.