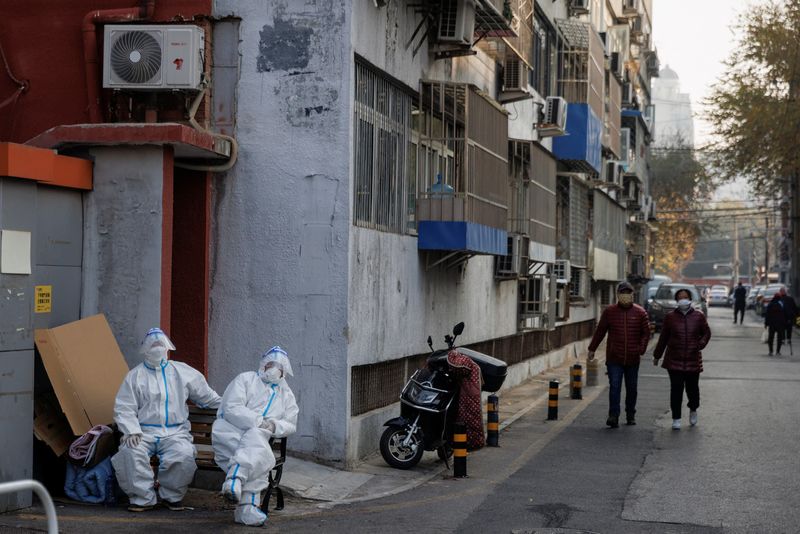 BEIJING, Nov 24 (Reuters) – China reported a record number of COVID-19 infections on Thursday, and cities across the country imposed location-specific lockdowns, along with other restrictions that are clouding the outlook for the world’s second-largest economy. world.

The surge in the number of infections, which has hit record highs since an outbreak in Shanghai earlier this year, is damping investor hopes that China will soon ease its rigid “no COVID” policy, which, along with the decline of the housing market, is affecting the economy.

The restrictions have also taken their toll on China’s increasingly frustrated residents, as well as output at factories, including the world’s largest iPhone plant, which has been rocked by violent clashes between workers and security personnel in a rare display of dissent.

“We believe that reopening will likely be a protracted process with high costs,” Nomura analysts wrote in a note. The brokerage cut its fourth-quarter GDP forecast to 2.4% yoy from 2.8%, and also cut its full-year growth forecast to 2.8% from 2.9%.

Chinese leaders have stuck to their “zero COVID” policy, which includes some of the toughest restrictions in the world, saying it is necessary to save lives and prevent the medical system from being overwhelmed.

However, in an acknowledgment of the pressure on the economy, the cabinet said China will use timely cuts in banks’ cash reserves and use other monetary policy tools to ensure there is sufficient liquidity, media reported. on Wednesday, an indication that a cut in the required reserve ratio (RRR) could be coming soon.

China recorded 31,444 new local COVID cases for Wednesday, surpassing the record set on April 13, when Shanghai was under a two-month city lockdown.

Although official contagion figures are low compared to world standards, China is trying to break all chains of contagion, making it a global exception under a flagship policy of President Xi Jinping.

China has recently begun to ease some measures related to mass testing and quarantine, and is trying to avoid blanket measures such as lockdowns, such as the one imposed on Shanghai’s 25 million residents.

Recently, cities have resorted to more localized and often unannounced quarantines. In Beijing, for example, many residents claimed to have received notices from their residential complexes in recent days informing them of three-day lockdowns.