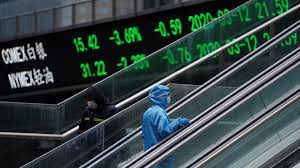 Market sentiment in Asia improved during early Thursday amid a lack of major catalysts. That said, hopes of more stimulus from China and the chatters surrounding easy rate lifts also underpin the market’s cautious optimism.

As per the latest Federal Open Market Committee (FOMC) Meeting Minutes, the majority of the policymakers discussed the need of slowing down the interest rate hikes, which in turn propelled the risk-on mood. Additionally weighing on the Greenback were chatters over the “sufficiently restrictive” level of the Federal Reserve’s (Fed) interest rates.

Elsewhere, hopes of Chinese government measures to ease the pains of the real estate and financial sector, as well as chatters surrounding a cut to the People’s Bank of China’s (PBOC) Reserve Requirement Ratio (RRR), seemed to have favored the risk-on mood.

Amid these plays, MSCI’s index of Asia-Pacific shares outside Japan extends the previous day’s recovery whereas Japan’s Nikkei 225 rise 1.10% intraday by the press time.

It’s worth noting that preliminary readings of Japan’s Jibun Bank Manufacturing PMI dropped to 49.4 versus 50.7 prior release and forecasts, which in turn suggests a stack decline in Tokyo’s manufacturing activities.

Stocks in China are the biggest gainers while South Korea’s KOSPI fails to justify the Bank of Korea’s rate hike. Further, equities in Australia and India are also up while shares from New Zealand ignore hawkish comments from Reserve Bank of New Zealand (RBNZ) Governor Adrian Orr.

On a different page, a holiday in the US and a light calendar elsewhere join the mixed performance of oil prices to challenge momentum traders. However, hopes of easy rates keep equity traders positive during sluggish early hours of the day.