Copyright 2021 - All Right Reserved
Home » A soaring US dollar will force the Fed to pivot away from its interest rate hikes, but that won’t be enough to prevent an earnings recession, Morgan Stanley says
American Stock Exchange

A soaring US dollar will force the Fed to pivot away from its interest rate hikes, but that won’t be enough to prevent an earnings recession, Morgan Stanley says 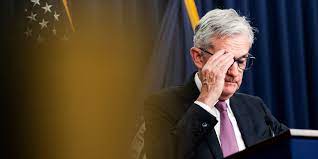 It appears increasingly likely that the Federal Reserve will pivot away from its currently hawkish monetary policy as global US dollar liquidity is now in the “danger zone where bad stuff happens,” Morgan Stanley’s Mike Wilson said in a Monday note.

Just like the Bank of England had to intervene last week by purchasing long-dated bonds to stem soaring gilt yields, the Fed will also likely have to intervene in a similar fashion, whether that means a pause in rate hikes or full-out quantitative easing.

“The first question to ask is, when does the US dollar become a US problem? Nobody knows, but more price action of the kind we’ve been experiencing will eventually get the Fed to back off,” Wilson said.

But investors shouldn’t put too much stock into a potential pivot by the Fed, he added. That’s because an earnings recession is imminent, and potential stock market downside from a sizable earnings decline would likely outweigh the potential upside from a Fed pivot.

According to Wilson, the earnings decline will be driven by several macro risks that companies have been forced to navigate in recent months, including China’s COVID lockdowns, a surging US dollar, higher interest rates, and weakness in Europe’s economy.

“It takes a long time for next twelve months EPS to fall for the S&P 500 because it’s a very high quality, diversified index and companies are loathe to throw in the towel on the future quarters until they have to. It appears that more companies are reaching that point where they can’t fight it anymore,” he explained.

“Bottom line, in the absence of a Fed pivot, stocks are likely headed lower. Conversely, a Fed pivot, or the anticipation of one, can lead to a sharp rally especially because we are so oversold… Just keep in mind that the light at the end of the tunnel you might see if that happens is actually the freight train of the oncoming earnings recession that the Fed cannot stop at this point,” Wilson concluded.

Iberia flights disrupted by IT problem

ASML: Steps made towards deal on curbing exports to China